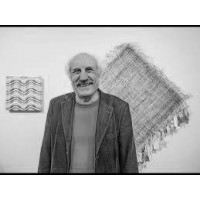 Giustino Caposciutti is an artist-educator who operate under the art of disabled uses art as an instrument of solidarity and social integration. For this he created in 1993 the Participatory Art that is to involve the public in creating works. This is done in different ways such as with FiloArX where invites each person to develop artistically a thread of jute. All threads woven together give rise to the work that represents the will, the determination of the participants.

In recent years, along with Giovanni Ghiraldotti began making a new type of art, BioYesArt creating works that have the property to protect from electromagnetic pollution.

Born in Civitella della Chiana (Arezzo) in 1946.
Albertina Academy of Fine Arts in Turin.
He exhibits since 1969.
Founder of various movements of contemporary art of great success:
1- Art Plural
Founded in Turin with Tea Taramino in 1993 was born and developed in socio-educational internationally. In 2013 came to the 13th edition with the participation of thousands of artists from around the world.
2 – Participatory Art
The Participatory art uses an approach to making art that directly involves the audience in the creative process, authorizing him to become a co-author, editor and observer of the same work (from Wikipedia)
a) - FiloArX
In Turin, September 24, 1993 at the opening of the Gallery Arx Caposciutti realizes FiloArX considered the first event of Participatory Arts in the world.
Later will realize a hundred events FiloArX with the direct participation of over 16,000 people.
The involvement of the public was later repeated by many artists to the point of considering the Participatory Art as one of the main movements of the last 20 years.
b) -Tessere ...
As an evolution of FiloArX in 2007 he created the event of Participatory Arts called "Weaving ...." where the highlight is to "weave" in a show with the Living Loom in costume huge mosaic work made by 100 people .
2012 - Turin - TESSEREXILRISCATTO - an artist was "woven" into a work created by 100 artists with disabilities in a public show in costume and with the Living Loom. The event represents the reversal, the redemption of what was done in 1972 at the Venice Biennale when an artist G.De Dominicis exhibited a person down, sitting for hours as the subject of his work.
Since 2007 were realized 23 events  Tessere... with the direct participation of about 2000 people.

3 - BioSìArt
The BioSìArt is founded by Caposciutti in 2007 with Giovanni Ghiraldotti after a collaboration of at least three decades in the field of alternative therapies applied in particular to electromagnetic pollution.
In fact, the BioSìArt, the Art that heals ... art as it is defined in addition to the proposed works that have aesthetic result, thanks to a series of materials and technical solutions, the property to change the path of the electromagnetic waves pollutants contributing to achieving an improvement of the places where we live.

Plural Art and the Art of Participatory Caposciutti have been the subject of numerous studies, articles, TV shows, magazine covers art and all the covers and graphic line of five issues of the magazine Ariadne's Thread.
In 2004 were the subject of the thesis of Simona Mattia at the University of Turin Faculty of Education Science entitled: FiloArX- Art as a tool for social action and, were also analyzed and described in the following art books:
- The Art of margins by Mangiapane, Pecci, Porcellana -publisher Franco Angeli - 2013
- Anninovanta  by  Roberto Brunelli -The Ori publisher - 2014

As individual artist Caposciutti has prepared more than 25 personal in Turin, Ferrara, Mantua, Arezzo, Vercelli, Livorno, Liege (Belgium) and in other cities.
Among the hundreds of collective remember that with which debuted in 1969 at the Palace of the Region of Valle d'Aosta and in recent decades exhibitions in Santa Monica (USA), in Zaragoza (Spain), Zug (Switzerland), Chisinau (Moldova), Monaco (Germany), the Galleria Du Comtè of Nice, the Trevi Flash Art Museum (PG), the Metropolitan Foundation, Teatro delle Erbe and Spazio Krizia in Milan, the Premio Suzzara (MN), Casa dei Carraresi, Villa Letizia and Museum Santa Caterina di Treviso, Villa Pisani in Stra (VE), the Forte of Annunziata of Ventimiglia, Textile Museum of Art in St. Gallo (Switzerland), the MAGI (Art Museum of Italian Generations) in Pieve di Cento (BO) , the PAV (Living Art Park) in Turin, Villa Giulia Verbania, Palazzo Lomellini of Carmagnola, Palazzo Opesso and all'Imbiancheria Vajro of Chieri, the Library of Moncalieri, the Ecomuseum Frediano and the Giardiniera of Settimo Torinese. He took part in five editions of Artissima of Turin with solo exhibitions at the Art Fair of Pordenone, in all four editions of the Biennial Fiber Art in Chieri and all 13 editions of Art Plural both as organizer, artist and auctioneer auction.
In 2014 he participated in a series of exhibitions as cultural exchange Italy-Russia in museums and public spaces in the following cities: Ufa, Oktjabrsk, Birsk, Salavat,! Sterlitamak, St. PetersburgIn
In 2015/16 exibition in Australia in these cities: Geelong, Pako Festa -Daikin, University Exibition hall- Melbourne - Ballarat- Colac - Surf Coast Culture Museum

Please login to write a review.